Last week we decided it was about time to take our little banka boat for a ride, after a few months of being out of action. Our group included our British neighbour, two of his guests (a couple from Australia) David & Fleur.

On the first day we missed the tide. The beach in front of Viento Del Mar is quite shallow, so it is impossible to maneuver a boat from shore during low tide. This gave our worker time to extend the shade on the boat. It gives the passengers a welcome break from the intense sun. 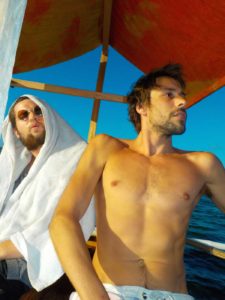 The next day it rained. A lot! By the time it stopped in the afternoon we were busy doing other things. We dug a hole, buried our food inside with some hot stones, and then preceeded to drink San Miguel beer for the next 6 hours. Unfortunately our neighbour stood on some glass and had to get stitches in his foot. He was fine thankfully. The dinner was fantastic.

On the third day we had some success…. to begin with. We managed to get the boat in the water before low tide. The bacon and egg roll we all ate for breakfast definitely helped our progress. It was a drunken promise from the night before. Chef David cooked the sandwich and we topped it with HP brown sauce, courtesy of our neighbour. Lush! After one more cup of tea we headed to the beach.

Our worker walked the boat over to a location where we can still take it out at low tide. While he did this we went to gather supplies – a few beers, 2 bottles of tequila, fuel, ice and antibiotics for yesterday’s acccident. Everything we could need for a trip to Dako island.

We drank the beer before we left. Then we walked along the beach and out to the boat. Released the anchor and wound the cord around the engine. Our neighbour was the one who attempted first. To start the engine you must pull the cord as hard as you can. This proved somewhat tricky to someone who just had 5+ stitches in their foot. After a few more failed attempts by the boys we concluded that the spark plug was wet. A local boatman approached us on his boat to give us a hand. Still no luck. Defeated, with no tools but 2 bottles of tequila we just sat on the water, floating peacefully as the sun started to descend.

We were disappointed that we did not manage to start the boat and go island hopping. Not that it mattered. We like to make the best of a bad situation here in the Philippines.